Nyack has served as the backdrop location for the filming of many movies, television shows and commercials over the years.  In one particular venture, Mazeppa and Empire Fire Companies teamed up as the backdrop for a 1980s FAX machine commercial.  Mazeppa's 1963 Seagrave Pumper was parked in the Empire firehouse with members from both companies filling in as extras.  Stardom shined on Mazeppa's own Bob Schettig and Robert Kolessar.

Hollywood took some liberties with reality.  If only it were that easy to get detailed information of the scene as you headed out the door.  Thirty years later and we still don't have a FAX machine.

Additional photos taken from the production set that day: 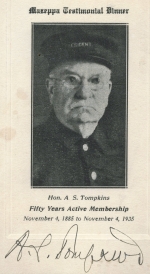 Copyright © 2006-2021. YourFirstDue Inc. All Rights Reserved. Designated trademarks and brands are the property of their respective owners. Content on this web site is supplied by Mazeppa Fire Engine Company No. 2. YourFirstDue Inc. cannot be held responsible or liable for any content, text, pictures, or any other media found on this web site. Maintained by the members and staff of Mazeppa Fire Engine Company No. 2.
Management Login
Powered by